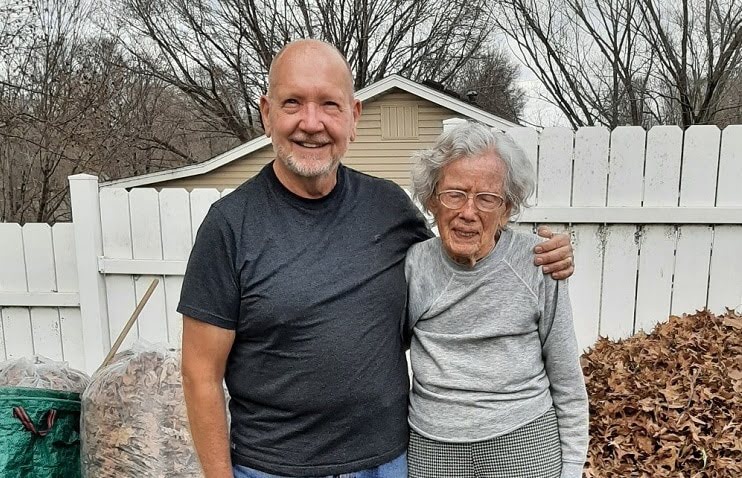 Acts of Kindness, Big and Small, Every Day, All Year Long

Dennis became acquainted with the Northland Shepherd’s Center (NSC) in 2016 when he helped NSC’s clients with their Medicare/Medicaid Missouri Claim. Dennis liked what he learned about NSC and later started volunteering in transportation, handyman services, and Medicare Open Enrollment.

Marge, who is now 99 years old,  became a NSC client in 2017 when she requested transportation to visit her husband Don who was in a care facility in Liberty.

Dennis volunteered to drive Marge. He remembers, “Back then, I was driving a little two-seater Mazda Miata MX-3 convertible. The first time I picked Marge up, it was a beautiful spring morning. As Marge was coming out of her house, I was putting the top up, thinking that a 94-year-old woman probably wouldn’t appreciate having the top down.  To my surprise, Marge said ‘leave it down, I love the fresh air.’  I knew immediately we were a great match and we have been for nearly five years.“

Rayetta, NSC Transportation Coordinator, remembers receiving an email from Dennis saying, “this was exactly what he was looking for“. Dennis became Marge’s regular ride to see Don and drove her weekly until Don was moved to a facility close to where Marge Lives.

Dennis helps Marge around the house doing simple repairs and doing yard work (raking leaves and hauling them off). He even helps her with her annual garage sale. Most recently, he moved her mailbox from across the street to one by her door and managed all the necessary change delivery actions with the USPO.

If there is not work to be done, Marge and Dennis just sit and visit about once a week and they talk on the phone two or three times during the week.

According to Marge, “Dennis is an angel. I don’t know what I would do without him!” Marge says that she knows that she can holler help and Dennis will be there!

“There isn’t just one word that I would use to express what I appreciate about Marge. Marge inspires me with her vitality and independence. Her faith in God and love for her family serve as an example to me. But what I like best about our relationship is that we have simply become close friends.  While I know Marge appreciates the little things that I do for her, it’s our friendship that really bonds us together and keeps me coming back.“